I received my first pair of Caspar fins yesterday, a 25 and 27. The finish is very impressive in 09, the body has a light sanding in the direction of flow and the leading and trailing edges are finished nicely. 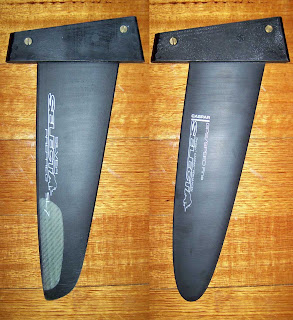 Comparing the 27cm Caspar with the 27cm SL7 the Caspar has a shorter chord length at the base and a little more rake. The Caspar foil shape also has more volume nearer to the trailing edge and almost a lump as it narrows into the last quarter of the foil profile. It is much more subtle than in the other dedicated assymetrical speed fins that I have seen.
The outlines below are the SL7 in orange and the Caspar in grey. 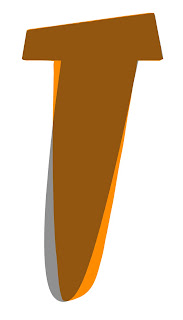 I took some quick measurements of the two foils.

I am looking forward to testing these babies on my CA44. I anticipate the 27 will work well with the 6.7 RSR and the 25 with the 6.2 Slalom MkIII I have on the way, and possibly my 5m RSR on tighter courses. I also hope to get sizes either side of these 2 once I have had a chance to fully test them.
Posted by Tim Hemer at 22:15