We have finally had some wind after the Autumn doldrums which means some TOW! I have got to sail the MxR UFO 38 three times now.  Two of those sessions resulted in spot PB's so they seem to be working well!
﻿
I have gone withe the UFO in my smaller blasting fins for control in the chop that we get at Boggy Lake.  34 is for use on my 90L slalom with a 6.9 & 6.2 and 38 is for the 112L slalom with 6.9 and possibly 7.7 if juiced up on flattish water.  I am using Katana  fins from 40cm up for a bit more raw power when the water is flatter and control is not as much of an issue.
﻿
I have found the UFO perfect for running the troughs and banging over the back of chop.  When you bear off with the UFO you have a great confidence that the fin will take whatever awkward chop forms kick up in your path.  Other fins, including some expensive carbons seem to get frisky and throw the board all over the place.  Maybe it is my average skill set but the UFO seems to allow me to go faster than ever before in average everyday conditions.  I also think the MrL 112 and Avanti M-1 have a part to play as they are the best board and sails I have used and they work well for me with the UFO.

I would recommend the UFO to anyone wanting more control WITHOUT loss of speed in average choppy sailing conditions.  The fin is not highly strung and can be sailed on the redline all day without fatigue. 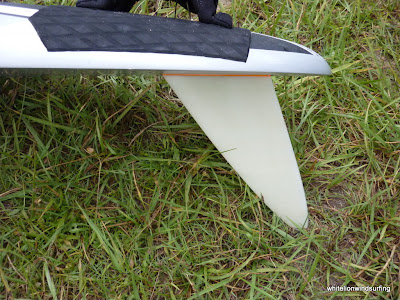 I have kept a close eye on the the MxR story and after seeing the results at Luderitz I knew it was time to get my hands on a few fins to try out. The tiny assymetrical speed fins used at Lederitz are obviously pretty specalised kit but there are many more styles in the MxR range to chose from including fins of the same outline offered with multiple profiles. The only dedicated speed spot I visit is Lake George on South Australia's south east coast. The lake has high salinity and weed which sits just below the surface so a weed shedding feed is essential. I had no problems using the Vector Delta Weed Speed fins in 2012 which had a rake of 40degrees on the 23cm and I like the feel of the wide base speed fins. The MxR Range includes the Wide 40 which describes the leading edge rake midway down the leading edge. The curved leading edge is ideal as the tip third is about 45 degrees, the mid third around 40 and the base third 35. This means you get more rake where you need it and less where you don't.

I received my MxR fins via express from the factory in Poland.  The fin quality is first class and the premium cover protects you investment nicely and has some nice pockets for fin screws.  I did have to sand the head slightly to fit the board but I would rather this than having a sloppy fit that requires shims.  A bit of floor wax helped the fin in the box as the head seems to be a urethane with an elastomer that can grip the box if the fit is a little tight.

My last speed session of the season was just a bit late for optimum Lake George conditions and the wind was frontal, not the usual constant seabreeze.  The northerly meant that the water was blowing from the lake onto the dry lake bed to the south that you usually drive over and a lot of weed beds were exposed as a result.

I headed out on my trusty JP49 and newly acquires 6.1 Avanti with the UFO Wide 22.  The MxR UFO Wide 40 22cm was shedding weed well but you had to start in a muddy patch as the water was getting low from the wind blowing the water away. The fin went upwind like a pointer and was nice down as well. I really felt the shallow water and thick weed limiting peaks in the 44's but only really managed to get 2 proper cracks at 10s as the wind went from 20-30 to 30 with 40 knot random bullets.

In hindsight I should have perhaps pushed past the comfort barrier and tried a few more runs but I had to get back on the road for the 4hr drive home.  All in all the session gave a good first impression of the UFO wide 22 as not just a good replacement for the 23 Delta Weed Speed(previous PB fin) but an improvement also as the tip felt stiffer and was transferring all the rider power it received.  I also purchased the 26 as a replacement to the delta 27 which will have to stay dry until later in the year!

I look forward to using the fin a few more times before I write a detailed review...