After much anticipation my new "real world" speed board has arrived - the JP Slalom VI 92. I previously had the Slalom V 92 which was a good board that planed early and gybed like a dream but I just felt that is didn't have quite the top end off the wind that I was looking for. 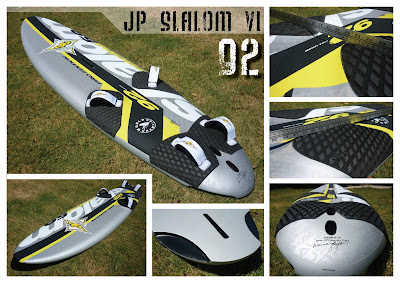 Design
The new board is 1 cm narrower than the V at 59 so this was a good start. There is a nice double convave that runs until 50cm from the tail and washes out into a panel vee. What suprised me is that there is 1.5mm of tail kick, this combined with the overall width might reduce the early planing capability a bit but the wider 41cm tail probably negates it. Once up and planing though the board feels looser and softer over harsh chop than the V. First time into the straps the wedge under the toes is really noticible and care needs to be taken not to over-commit to an upright stance. I found that it was easier to hook in when traveling a little faster and when the body was more out-board rather than hooking in too early when the body is more upright. This is because the toes have to point a little more upward when placing them in the strap and is only a problem on lazy hooked in starts. The ride is also softer with 5mm pads, I think the old ones were about 3mm.

Sailing
I have only had 1 session so far on the board but will add to this section when I have more TOW. Initial feel is that the board will need a little more than the 31 cm fin I was using with a 7m when conditions are choppy. I found that the board got a little rolly and even though the nose didn't really lift a little more tail lift would help the ride. I am getting a 34 Venom and hope this will suit the 7m EvoII when well powered up. I have a JP Sallom III 36 for gustier days and to also try out the 7.8 RS Slalom on lighter days. I feel that the board will take the 7.8 slalom easily as it is quite a light yet powerful sail.
Construction
The 59 has a timber deck and hull which gives it a more robust and slightly heavier feel. Last years 92 had a timber hull and carbon deck and even then you could feel the veneer dampening the ride and softening the feel of the board through chop compared to the full carbon slalom IV's. The veneer is just visible through the silver paint and is well sealed from drying out, a problem that some of the more "visible" veneered boards have. It does feel heavier than the V but I think the robust feel is more of an advantage. I have heard that the bigger boards are still full carbon but am unsure of when the transition in construction occurs. 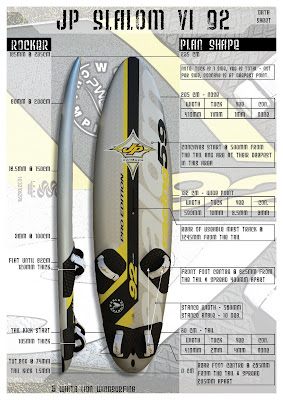