I took a bit of a gamble this year when choosing my light wind board and went for the new concept from JP which is the love child of a formula and large slalom board.  I have used 80cm+ slalom boards for light winds in the past and found that even at 130+ litres they sat a little low in the water for my weight at sub-planing speeds.  In 7-12 knots I use a 9.5m sail, combine this with 110kg body weight, harness, wetsuit etc and the surplus volume you thought you had soon gets taken up.  There were also a few occasions that I thought there was enough pull in the sail put I just couldn't unstick the board and plane.  The JP Super Light Wind (SLW) on paper corrects some of those shortcomings of a big slalom board for a heavyweight sailor, but would the board perform as intended? 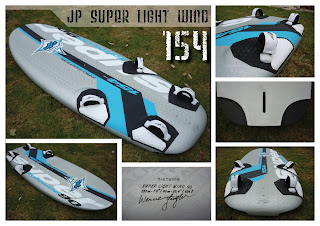 Design
The width of the SLW is smack bang in the middle of a Formula(100cm) and XL Slalom Board(~80cm).  The deck has the now standard(on jp performance flatwater boards) Race Deck but the pads are thicker in the heel area(white pad) than the slalom boards.  This providing a little more softness in chop and also tones down the effect of the race deck.  The tail planing width is 700mm providing ample leverage over fins into the low 60cm range. There is no tail rocker, a rocker flat of 700mm and a nose lift of 206mm.  The rail shape and tuck is very similar to my Slalom VI 68.
Sailing
Getting into the straps isn't too hard once planing but may still take some getting used to if you are normally sailing smaller less racy boards.  Once up and planing the ride is VERY stable. To some it may not be engaging enough but it really does allow you to just relax and enjoy the sensation of effortless planing.  I tested the board with the Select S10 57(as recommended by Rik!) and this may have something to do with the boards excellent behaviour.  I think the standard Slalom III 56 would work well for lighter sailors or bigger sailors fully powered on a 7.5m sail but I have not yet had the conditions to try it out.  Gybing is easy but the fact that you are often sailing so fast compared to wind strength often means that you either get backwinded or have no drive after the rig flip.  I am sure there are better approaches and timings that would set you up for a planing exit but this would take a little time to get dialled
Construction
The JP website states that the Pro Edition is constructed from Biax Carbon.  This is NOT the case.  The deck and hull are timber veneer and there may be carbon reinforement.  This is the same construction that is used on the hi wind slalom models, not the light wind ones.  The board feels solid and this may indeed increase durability for the target market of light wind performance freeride however, it does make the board feel less responsive and a little heavy.  One thing is for sure, the website should be updated to reflect the true construction used.  The construction feels very comfortable over chop but is a little slower as a result of it sticking a little in the troughs.
Overall
I think that the JP SLW delivers on its statement that "...this board simply widens the wind range where it is possible to get planing and have heaps of fun. It plans as early as Formula boards (which have been purely developed for racing and to go straight up and downwind) but it is a lot more fun."
If you are focused on SPEED in light winds then an XL slalom board is probably the go.  You may not be planing as much as the SLW in "real world" light wind that can have big holes as compared to a race where it will be scratched if lulls are less than the minimum wind speed.
Video
I
Posted by Tim Hemer at 16:46 1 comment: