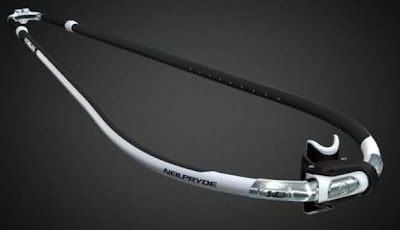 Neil Pryde have release a new range of booms for 2010 with many new features including an S profile in the arms.
"The clock has long been ticking for conventional boom design, and that’s because the performance has been held hostage by simple physics. It’s simpler eally; as wind pressure increases, a straight or convex boom effectively becomes shorter as it bends in response to increasing sail load, making the sail fuller, less efficient and harder to manage.(Ask your forearms, they’ve been putting up with it for years). Everybody make way for the new convention; the ‘S’ profile boom. The unique shape commands the sail to retain its shape and length whatever the breeze, providing a more stable andpredictable delivery, and more useable power. The ‘S’ profile is standard this season acrossthe entire NeilPryde range, so everyone can get their hands on it."

I am sure that this will help when loaded up on a slalom course with high apparent wind but I kinda like the boom arms giving way slightly and giving the sail more depth when going deep off the wind, a bit of natural nos. I am told it is only 10mm or so that the boom varies from a conventional profile and with the new race and slalom sails requiring more outhaul and clearance from the boom this should not compromise tuning. However the boom may touch more sail on older sails when bagged such as the RSR. I am looking forward to checking them out when they arrive in the shops. 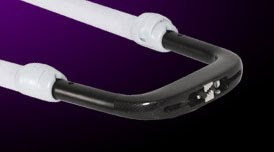 The X9 feature new
box section tails that
increse in width in the
larger boom sizes.

Well I have finally had a decent session at Grundys(Goolwa - Clayton channel) and feel that I have a taste of what this strip has to offer. I rigged big with a NM PB the focus of the day. It is such an effort to get gear to the waters edge that I did not have the motivation to rig my 6.2 which may have helped the team with a better peak and 10s average. I already had 3 boards and 2 sails out there as the initial forecast was predicting 15-20. We ended up scoring 15-25 early with with winds increasing to 20-30 later with occasional 35 knot gusts.

I also improved my alpha 500 as it was perfect in the top corner with plenty of wind and flattish water. I have since checked the track and found a 26.56 at 51 metres, I might have to see if other software calculates the track within the 50m radius! Unfortunately I ran out of card space on my headcam and would have liked to have mixed a video of the alpha track and video footage, maybe next time.

I analysed my NM and have learnt a lot, I pulled up a little early and also hit a few lulls through the run which I cant do much about. I think if we get another day with a similar direction and more consistent wind 37+ will be easily achieved.

Today I spent 10 hours trying to find the best way to incorporate a speed readout from the gps data in a head cam video. I can get it to play as a subtitle but embedding the subtitle for further editing it the hard part. Most software keeps it as an option for DVD playback. I had a bit of fun putting the 2D projection down the side.

Email ThisBlogThis!Share to TwitterShare to FacebookShare to Pinterest
Labels: Sessions

The much anticipated JP Speed boards have finally been released to the public. I have had a 49 on order for a while and hope to receive the beast at the start of September. Apparently Antoine is going to use the range of speed boards in Karpathos, they include a 54(73L), 49(65L) & 45(53L) an come with a G10 fin(28, 26 & 24 cm). MVM has already been sailing them so there will be a number of JP/Pryde combos around. I hope to use it as a step down from the JP60 with predominantly 7 .0& 6.2. Watch this space for more info in the coming weeks... 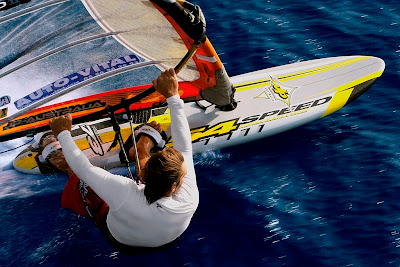