The conversion of a Power Box Head to Tuttle Head can be quite easy depending on the brand and head material used.  I recently modified some Techtonics fins with PB heads to Tuttle for a friend.  The fins were originally PB for use on older F2 Sputniks, they needed to be converted to Tuttle for use on JP Slaloms. .

The quickest and easiest conversion is when the position of the fin in the PB is to be carried over into the Tuttle Box.  A Power Box head fits into a Tuttle mould with minimal modification to the front and rear face of the head.  If the length and angle of the fin are to be modified in the conversion then there are a few more steps required.  I used both methods as one of the fins was to remain a 40cm Tomcat, the other fin, a 32cm Falcon was shortened to 30cm.

To do a conversion you will need a Tuttle Head Mould, Epoxy Resin(cast urethanes can be used but the method described below suits laying up reinforcements) and various fillers.  I will cover making a Tuttle Mould in another article. Wear a dust mast and use a vacuum cleaner whenever cutting composites.

Maintaining Geometry - Keeping the same length, rake and position.
Make a cardboard or thin plywood template of a Tuttle head(side).  Make this as accurate as possible as you will be cutting fin heads to this shape.  Place the template on the PB head with the tip of the leading edges aligned.  The PB front face will be curved, the Tuttle will be straight.  Mark the outline of the Tuttle Head using a marker or pencil and cut off the excess using a hack saw.  It is better to take of a little more rather than less as filing is more time consuming that cutting.  Smooth out the cut faces using a file and add a radius to match that on the Tuttle Head - about 5-6mm depending on who manufactured the reference fin.  Sand the remaining faces of the PB head with coarse paper to key into the filler that will be laminated to it. 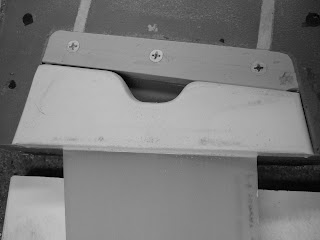 Shaped PB Head sitting in the Tuttle Mould.
Check the fit in the Tuttle mould, you want to have about a 1/4 of a millimetre to allow for a couple of layers of carbon or glass.  Bring both sides of the mould together and again check there is a about a 1/4 of a mil down the one side.  The mould pictured above can be used to cast standard and deep tuttle heads.  In standard mode I have infill pieces in the mould.

Shortening the Fin in the Head Conversion
If the fin is to be shortened then there will be less or none of the original PB head left attached to the body of the shortened fin.  In the case of the 32cm Falcon being shortened to 30cm there was about half of the head left.  Since the bottom face of the PB head will not be flush with the Tuttle Head mould a pair of flushing plates will need to be made.  This will be covered in a dedicated DIY article.  If the fin is shortened more than 4cm then there will be none of the PB head remaining.  In this case it is a standard tuttle re-box with more filler and flushing plates required. Tuttle Fin Re-Box S10

The Support Jig
The jig I use to support the fin is designed to swing down onto the bottom half of the mould.  The setup is done before the layup so that the fin stays fixed in the desired position.  I have tried many different methods which usually invlove laying up the mould, closing the mould, adding filler and then shoving the fin in.  The fin support jig then needs to be attached and you sometimes find yourself fighting the position that the fin was inserted.at.  This results in more unwanted movement of the reinforcement and airbubbles in the filler.

Fins that are cast with the tip above the mould(vertically) have the flexibility of several finishing options for the top face(face flush with the deck).  The top face can be "floated" or moulded flat with a single or pair of flushing plates.  The floating method involves simply filling the mould so the the top face self levels to flush with the top mould face.  The advantages of this is that it is quick and there is minimum finishing required.  The disadvantages are that bubbles can rise to the top surface leaving a textured porus surface depending on the materials used. Also, if even a small amount of resin leaks from the mould the top face will cure low and will need to be built back up. Flushing plates take more preperation but deliver a more consistant finish.

The support blocks are made by casting slotted pads from a tuttle fin placed in the mould.  Tape off the fin in the areas that will be cast using several layers of masking tape. 3 areas are ideal, 2 at either end of the leading edge and 1 in between the front pads but placed on the trailing edge  Find some wooden blocks that can be screwed to the hinged base plate, the bottoms must be nice and flat without any rock. I use a long block on the leading edge and a single one at the back combined with a sliding g-clamp to locate the fin securely.  Use some polyester putty to cast a pad in the areas that the fin has been taped off. I will do a seperate article on creating a Fin Support Jig.

Laying up the head.
Using the Cardboard Tuttle Head Template cut out 4 layers of Carbon or Glass cloth, 2 for each side of the head.  Use masking tape to cover the bottom face of the PB head and the adjoining foil surfaces. Wax the head mould halves and coat the inside the mould and the sanded PB head with neat epoxy resin.  Layup the 2 layers of cloth in each half of the mould.  Add talc, chopped carbon and a touch of carbon black to the neat resin to make the special sauce. Butter each side of the mould with enough filler to fill the head completely as well as sqeeze out through the part line. Swing the fin jig into place and spread the displaced filler over the fin head being sure not to create air bubbles.  Place the other half of the mould in place and clamp the down tight.  Allow to cure overnight.

The photos shown below are for the Falcon that was shortened by 2cm. 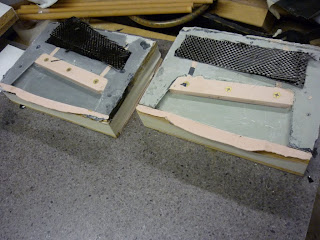 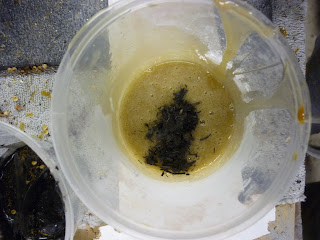 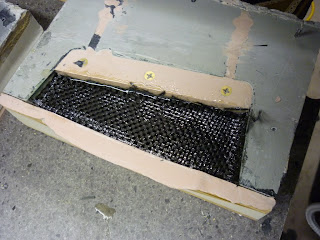 2 Layers of CF Cloth layed into each mould half. 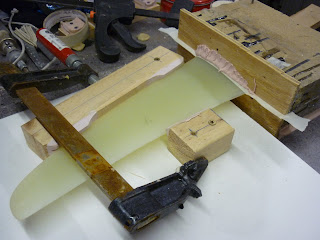 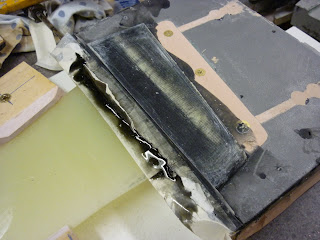 Half of the Tuttle Mould Removed. 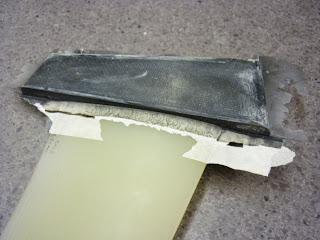 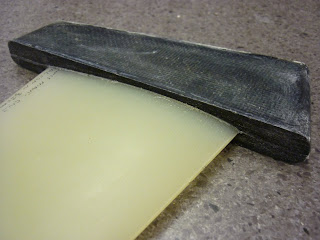 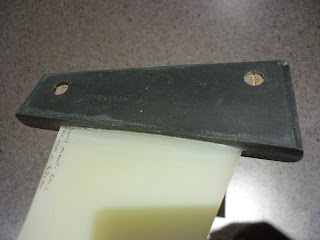 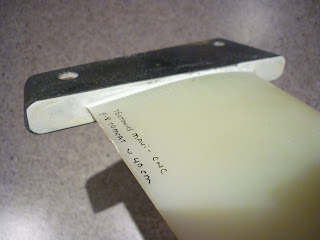 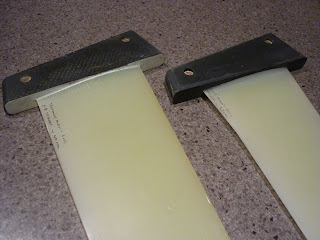