I have now had a few sessions on my recently acquired Fanatic Falcon 111 so I thought it was time to share my thoughts and initial impressions.  All sessions so far have been with a 7.8m Evo III but I have used two fins from Select - a 41cm S11 & 37 S10.  Conditions have ranged from a gusty 12-17 knots and choppy water up to 30 knot days with both big chop and flat water sections.  Locations were the fresh water Boggy Lake and salt water Lake George, both are located in South Australia.  Test dummy is 110Kg and 193cm with over 20 years sailing experience. 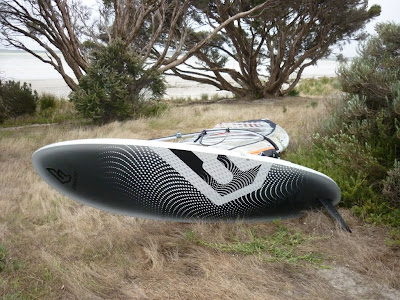 Design
The first Falcon I ever owned was the 111 from 2006.  Back then the design was quite a bit different; mono concave tail, double concave mid section and an overall length of 245cm. Over the past 5 years the concept has evolved into a well rounded racing and fast freeride machine. 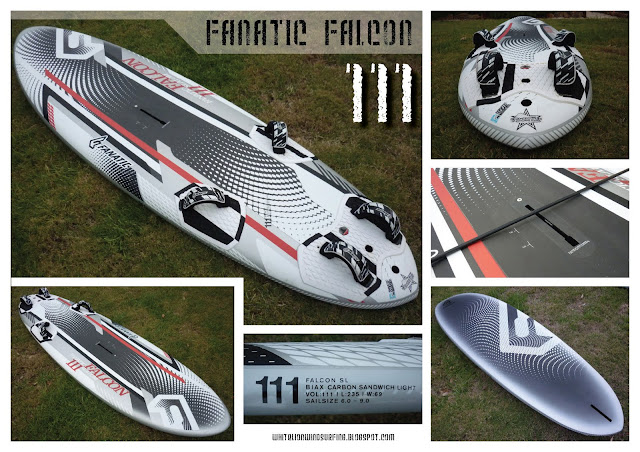 Hull - The current design has a double concave in the nose and mid section that runs until 40cm from the tail and washes out into a spiral "power vee". There is no tail kick and the rails have a comfortable amount of tuck throughout.

Deck - The most noticible features on the deck are the modified volume distribution and the recessed mast track / deck concave. The larger volume from the front straps back allows a nice amount of deck roll which increases comfort levels and allows you to sail faster for longer.  The rear straps are very clost to the tail and as a result the centre of your rear foot is directly over the leading edge of the fin.  The stance width of 520mm(front strap second hole from the front, rear strap 3rd hole from the front) is quite a bit narrower than other brands are using  and combined with the rear strap placement it allows a really connected ride on the fin and means you don't have to bend the back leg too much on deep speed runs. 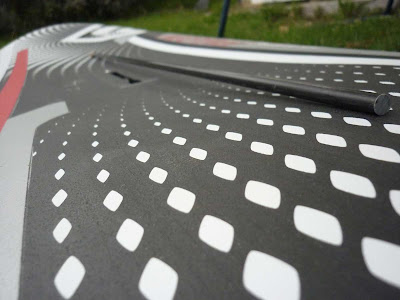 Recessed Mast Track / Deck Concave
Hull Graphics - As with the other boards in the fanatic range, the falcon has been given a macke over in the graphics department.  The hull is a combination of black base coat with airbrushed silver outline.  The paint is then screen printed over creating the white fanatic logo pattern.  You can feel a raised area on the edge of the screen printing but is does not seem to adversely affect water flow.  A light rub with wet and dry would take the edge off but this may affect resale value.  The paint and screen print both have a matte finish unlike some of the other boards in the fanatic range which also use gloss in combination with matte finishes. This suits a dedicated slalom board well.

Deck Graphics - The deck has the bi-axial carbon finished with a clear resin,  the rails are silver and airbrushed to fade into the carbon deck.  A full clear vinyl transfer with red and white screen printing is then applied with non-skid and pads applied over the top.  Full vinyl deck graphics are pretty standard these days but an unpainted full carbon weave is uncommon.  It shows that high performance materials are actually used rather than hiding cheap materials under full deck graphics.  Care should be taken not to leave the deck(and hull) in direct sun on really hot days as delamination could occur if the laminate gets super hot.
Sailing
From the second you step onto the board you can feel the increased buoyancy in the tail.  There is no problem with the nose sinking when off the plane as long as you have a little power in the sail to keep you moving slowly. In transitions you have to remember to be slightly tail biased but this is easy to get used to.  The water flows well around the stern and the board un-sticks easily.  Pumping the board onto the plane in marginal conditions is relatively easy and finding the right trim is intuitive.  Just using leg pumping seems more easy than other slalom boards as the board "feels" very light in the water and doesn't need a really big fin to hold a straight course.  The large amount of spiral vee certainly aid this directional ability and once up and planing give the board a very lively and maneuverable feel.  Direction changes can be swiftly executed allowing for efficient negotiation through both confused chop and long snaking trough lines.  If however you do have to go over steep chop head on the hull shows little sign of slowing and feels very efficient.  In very steep chop it was easy to sheet out slightly to lift the nose while maintaining full board control. 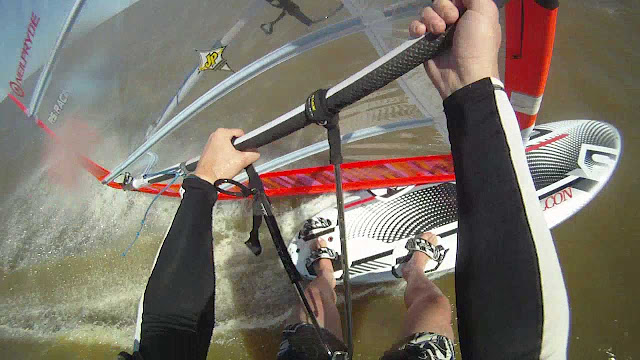 The Falcons comfy stance is narrower than most slalom boards...
A 41cm S11 was used only on a marginal wind day so the full upwind potential could not be tested for figure-8 racing but even just powered you could point high with good speed.  The main use I have for the board is GPS speedsailing and it fills this role perfectly.  The board was very fast and easy to sail off the wind and it was really easy to keep the tail locked down and sailing flat.  I found that the vee and slightly narrower tail minimised the rocking from side-to-side that you sometimes get on wider tail boards with sail power changes and harsh chop.

Gybing was easy to initiate and the rail held well in choppy conditions.  The board seemed to prefer to be gybed with equal or slight rear foot bias depending on the entry speed and sail power available.  No tacks were attempted as I rarely need this manoeuvre when speed sailing.


Short Gybe video playing with a boom tail mounted GoPro.
Construction
The hull utilises a basalt cloth which feels robust and combined with a bi-axial carbon deck the boards fells both light and stiff.  This is a high performance board and should be treated as such, the deck will ding easily if impacted so take care. 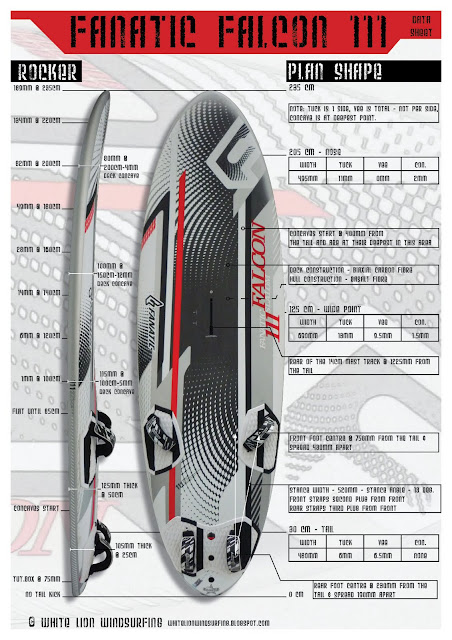