First impressions...
I can remember seeing some photos of this camera as a wrist mount a few years ago and thought it was a bit of a toy - a tiny little box that was not as stylish as others on the market but when I looked into it further I realised that it was so compact that it could not be any other shape!

The GoPro Hero Wide is powered by 2xAAA batteries which take up the whole rear of the camera, as with most cameras it is best to use Lithium(3hrs) or NiMH(2hrs). There is some onboard memory(16Mb) but it is definately best to put a 2Gb card in straight away. It can shoot TV resolution(512x384) video and 5Mp stills with a range of auto shoot options such as a burst of 3 shots or continuous shooting every 2 or 5 seconds.
Special attention has been paid to the point of sale presentation, the camera packaging is a fabricated clear acrylic box which provides a full view of the camera and its housing. It is rare that this attention to detail is shown in packaging design these days.
Operation
The camera is extremely easy to operate and navigate through each of the different shooting modes. I did however take my helmet of before a run just to make sure that it was recording(red flashing light). The camera beeps when you manually shoot stills and record which can be heard inside the helmet if there is not too much background noise. There is also an invert shooting option so that the camera can be mounted upside down. I have not tried this yet but imagine it would be good when mounted under the rear of the boom arm. 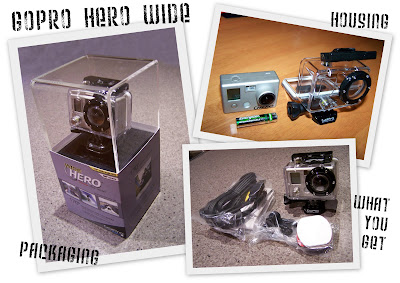 Housing
The housing is shock and waterproof and has a robust rear seal that is rated to 30m. Check out the AAA battery in the foreground! This thing is tiny and as a result you dont even realise you are using it.

What you get...
With the standard kit you get the camera and housing, a stick on flat mount and a USB/RCA combo cable. I chose this kit as I wanted to stick the camera to the helmet and did not need the helmet head strap mount. This would be suited to cycling or vented helmets that you didn't want to stick a mount on.
Roll Bar Mount Kit.
For the boom shots I mounted the housing directly to the bar clamp, this allowed the camera to shoot down the tube that it was mounted on. This worked well mounted on the boom grip adjacent to the head as the camera is pointed in the centre of the action around the sailors chest. I took some still photos after putting the camera on the tail of the boom and will try this the next time I sail. I think the other linkage pieces will be required so that the camera can sit beside the boom and centre closer to the mast base.
Grab Bag Mount Kit
You get 2 curved and 2 flat 3M stick on mounts. The curved mount is well suited to helmet mounting - make sure you get the position right as the 3M adhesive won't give you a second chance. You also get 2 Horizontal Surface Quick-Release Buckles, a Vertical Surface J-Hook Buckle and a spare Thumb Knob with Nut and Bolt.
Helmet Mount.
I chose to mount the camera slightly forward of centre so that it sat a little lower. The mass of the camera and the wind resistance was minor and didn't affect what I was doing whatsoever. Also, with it slightly forward you can duck your head when you flip the sail in the water and the back of the helmet takes any contact instead of the camera. With the camera off this also means that the mount will not damage the sail doing the same. 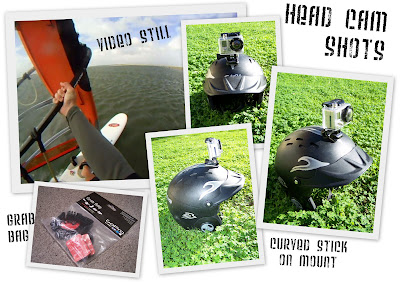 Boom Mount
Mounting on the front of the boom you don't even notice the camera. I am not sure if it would hamper the rig flip as I was speed sailing on the day I used it and didn't even gybe. 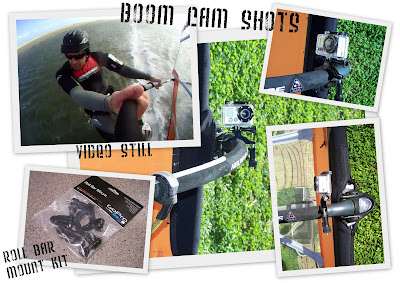 Rear Boom Mount
Mounting on the rear of the boom grip or the tail you can get another interesting perspective. The wind was blowing in the back yard and I had to point the camera into the sun. The wide angle lens will still capture the full sailor even this close. 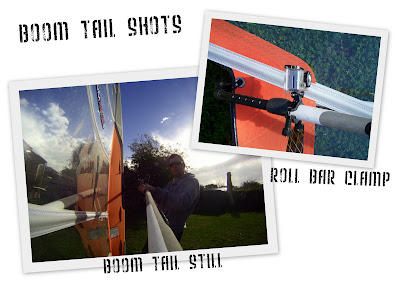 Conclusion
This camera is one of the best investments I have made! I can re-live the sessions and show others what I "get up to". I would even consider getting a second to shoot 2 views at once or the standard model to shoot others over greater distances.

I purchased the GoPro Hero Wide and the mounting accessories from Adventure Cams HQ.
They had the best prices I could find and also included a Windows Movie Maker tutorial DVD and a handy Spudz Lens Cleaning Kit. The delivery was promt and everything was well covered in bubble wrap. They are also Australian(WA) so you are supporting local business.
Posted by Tim Hemer at 15:00